Virtual Reality (VR) and Augmented Reality (AR) are not new concepts; it’s just that when they were first introduced into the world, the technology to support them or help them go main stream was very expensive. As faster, smarter, cheaper and immersive technologies become readily available; users start to adapt their consumption habits to accommodate these new technologies.

As compared to a website or a regular mobile app which most brands use as current means to engage with their users, Virtual Reality & Augmented Reality have the potential to give a greater emotional resonance to objects and topics. Virtual Reality and Augmented Reality, if planned and executed well, can be powerful platforms for businesses to build and enhance their customer experiences.

What is Virtual Reality (VR)?

Entry level, mass-market VR headsets like Google Cardboard which start at a couple of hundred rupees to a mid-level HMDs (head mounted display) like Google Daydream VR or Samsung Gear VR which is in the 8,000 to 10,000 rupee range, and then the premium HMDs like Oculus Rift and HTC Vive which cost close to a Lakh rupees.

Virtual Reality has uses across a wide range of verticals ranging from entertainment to education, from travel and tourism to training. Highlighting a few use cases below:

What is Augmented Reality (AR)?

AR is a technology that superimposes a computer-generated image on a user's view of the real world, thus providing a composite view.

Augmented Reality as a technology and a medium is growing at a really rapid pace and businesses across the globe are adopting it to meet their business objectives. This is primarily because unlike VR which needs investment in specific hardware to experience the content, Augmented Reality can be experienced on any smartphone/tablet, which is getting cheaper and more powerful.

Moreover, with the newly released ARKit from Apple for iOS devices, developers have been busy playing around with ARKit and have already rolled out a number of cool apps. These apps give us a glimpse of the future of AR, and it looks very promising. It is also projected that 500 million iOS devices will be ARKit-compatible by the end of 2017.

In addition, Google have also announced their own AR software, ARcore, which will be available to 100 million android devices in the coming months.

Augmented Reality also has uses across a wide range of verticals. Highlighting a few use cases below:

What is Mixed Reality (MR)?

MR is a form of Augmented Reality that is somewhere between VR and AR. Mixed Reality augments the real world with virtual objects that aim to look as if they are really placed within that world.

While MR headsets are still in the development phase, two companies most prominent with this technology are Microsoft and Magic Leap. Microsoft’s HoloLens has the most traction, as there have been multiple demos showcased online on how the headset will change the way we interact with the world in the very near future. 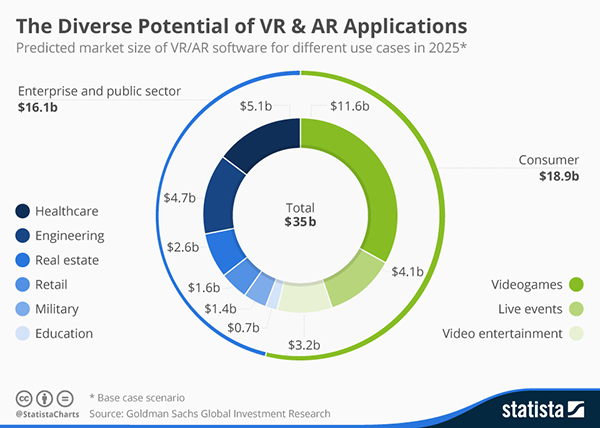 There is a growing market for these immersive techs, and with the promise of VR & AR applications, businesses should leverage these tools as it will not only help them save time and money, but also bring about a transformation in approaching ideas/experiences that could possibly disrupt the current business landscape.